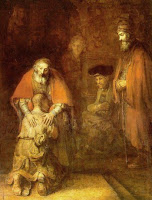 Many people are familiar with The Prodigal Son, a parable of Jesus, depicted in this famous painting by Rembrandt. Although it gives hope to parents of prodigals, the emphasis on the story in the Gospels is more about forgiveness than a wayward child.

I have always loved this story for many reasons. But it was not until I was asked to forgive like that Forgiving Father did the story become etched on my soul.

You see, my mother passed away in 1993. I knew it was hard on my dad to lose his wife and companion of 47 years, but I did not know how hard until his grief drove him away from us.

In his loneliness, just seven months after my mother's death, my father eloped with a woman he hardly knew. (Yes, he eloped; carrying their luggage covered with large trash bags, leaving their apartment complex before the sun came up, like sneaky teenagers.) His new wife convinced him in his weakened emotional state that my sister and I were after his money. Mind you, he was not a wealthy man. His money was hardly enough to quibble over and was there for any long term health care needs. Yet her incredible greed sucked his bank accounts dry with a brand new car, plastic surgery, and whatever else she desired. The emotional, mental and physical abuse she brought upon my 84 year old father, convinced him to break all relationship with us.

For the first few years, I sent him letters, called him on the telephone, and even showed up for surprise visits at his apartment, only to have my mail returned unopened, receivers slammed down, and doors shut in my face, with the words, "I'm sorry; I have no family." Eventually I was able to clothe myself in the peace with God, knowing I would get my father back in Eternity.

In 2003, my dad found himself alone. In a little over nine years, she moved him four times (including one move across ten states), spent all his money, claimed any thing of value from his belongings, and eventually, locked him out of his own apartment. In his broken, penniless state, he was finally able to listen to the truth. On February 3, 2003, just a few days before the tenth anniversary of my mother's death, my 93 year old father moved in with us.

How could I accept him in after all the rejection?

How could that Forgiving Father welcome home the prodigal after the financial loss, physical separation, and embarrassment he caused the family?

In the book, Exclusion and Embrace, theologian and author Miraslov Volf writes ~


The most significant aspect of the story is, however, that the father who lets the son depart does not let go of the relationship between them.

The Forgiving Father in this parable taught me many things . . .


. . . even while others are separated from me, remain ready to embrace


. . . always be willing to welcome home the prodigal, regardless of the pain


. . . just as God forgives me, so I should forgive those who hurt me

The first night that my father spent in our home, he walked from room to room, and I heard him say, "Talk about amazing grace, this is amazing grace." My dad lived with us almost a year before he suffered a stroke at 94 years old, and passed away six weeks later.

In this world of exclusion, where relationships are easily discarded, families are torn apart by divorce, and children are disposed of before they are even born, what an example of embrace - of God's amazing grace - the practice of forgiveness can be. It is powerful enough to transform relationships, to draw people into God's Kingdom, and redeem the future.

I thank God often for the gift of my dad's return to me, and for His love that covers both my sins and those of my father.
Posted by Bonnie at 1:45 PM

I once heard someone say "unforgiveness is like drinking poison...and waiting for everyone else around us to die." The only word that surpasses "forgiveness" is "reconciliation." The beautiful thing about reconciliation (especially as seen in being reconciled to our heavenly Father) is that the second relationship is even better than the first.

May we all seek forgiveness and to forgive...but may we also experience the deep satisfaction of reconciliation, as with you and your dad.