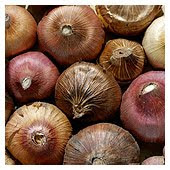 Something caught my eye last week as I hurried through the garden center at the hardware store.  (The afternoon temperatures where I live seem to challenge the fact that the first day of fall is just around the corner.)  I was surprised to see the bags of bulbs on display.  As I rushed past them, I found my thoughts drifting to another time.

I vividly remember the cold February morning when two friends knocked on my front door.  It was about a week after Scott's memorial service. There they stood ~ gardening tools in one hand and bags of bulbs in the other. They simply announced that they had come to plant bulbs for spring flowers.

There was something so symbolic in their work that day.  I watched through the living room window as they dug down through the cold dirt. Carefully they placed each bulb in a warm bed of earth just below winter's chill.  And there the bulbs completed their winter rest ~ protected from the last blast of cold air, warmed by the ground which entombed them. 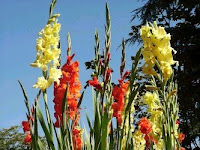 It was not many weeks before I noticed the first push of tiny plants through the dirt in the garden.  Then the thin stalks began to grow and buds appeared.  Sure enough ~ as winter became spring ~ so the buds on the stalks opened to reveal the beautiful display that had been tucked away in each bulb.

As I reflect on the bulbs planted in my garden that winter in 1996, I am amazed how the experience often parallels my own life's journey. Each of those bulbs is really a dwelling place ~ formed to protect the beautiful plant from winter’s chill, just waiting to be roused by the warmth of spring. The bulb also contains nutrients to ensure the plants' survival during its winter nap. Many plants that grow from bulbs are perennials. Although each will die back to the ground during a dormant period, they are protected from the harsh realities of winter, as they wait for the promise of spring to bloom, year after year, at their appointed time.

And so it seems with my life ~ the seasons come and go. I know there will be winters to endure, times to nurture and renew my soul. And at an appointed time, the warmth of spring will bring forth the beauty of redemption and restoration.


Deep inside every man there is a private sanctum
where dwells the mysterious essence of his being.
A.W. Tozer
Posted by Bonnie at 8:30 AM No comments: