Today I grieve the loss of another young son, just four months of age, whom God called Home this week.

Today I call upon the God of all comfort to sustain another mom and dad as they close down the short life of their dear son.

Today I once again go to a mortuary to hold a precious little hand and a tiny foot, and press them into soft clay to mold a lasting memory of this dear son's earthly body.

The death of a child is so painful. It is a period before the end of the sentence. It is not only the loss of the present but also the loss of what might have been . . . the milestones and relationships that will never be.

As a fellow traveler on a journey of grief, a bereaved mom who has walked a little ways down the road, I can say that the future brings opportunity for transformation. But in the present, the here and now, in the rawness of this loss, the weight of this grief may at times seem too much to bear as this young couple begins to create a new normal that does not include their precious son.

Today I offer this young mom and dad a small gift as they begin their own journey of grief, as they move toward transforming their relationship with their little man . . . from a relationship of presence to a relationship of memory. They are still his parents; he is still their son. Death does not change that. But it does mean that their precious memories . . . how he looks, laughs, plays; his sweet smell, tender cries and warm hugs . . . these will forever be spoken of in the past tense, and will be what sustains them over the coming decades.

Author Norman Cousin wrote, Memory is where the proof of life is stored.

As you remember this family, whether or not you know them personally, bathe them in prayer. If you are near to them, share stories of their precious son. It is true that your comments may bring tears to their eyes, but oh, how their hearts will be filled as you make deposits into their storehouse of memories.

May they feel the everlasting arms of the Father, the God of all comfort, who knows the sorrow of the death of a son, carrying them until they once again hold their precious son in their arms for all of eternity.
Posted by Bonnie at 12:03 PM No comments:

I am told
there is an old Italian phrase
about rainy weddings ~
Sposa bagnata, Sposa fortunata.
It means, Wet Bride, Fortunate Bride!

Eleven years ago this Saturday, on June 6, 1998, our house was filled with excitement. Amy and Jeff were getting married in a few short hours! 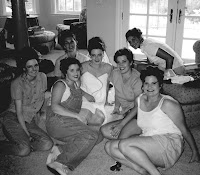 We spent that day decorating the lovely yard of the Jackson's home beside the Kings River. Friends brought the bouquets of wild flowers they had grown to decorate each table. Twinkle lights and white tulle draped the edge of the yard and the center aisle where Tony would escort our daughter. Amy and her bridal party were upstairs in the Jackson home, having their hair and make-up done. It was a wonderful day and a fairy tale wedding was in the making!

Then, about 4:30 pm, the clear blue sky darkened. Out of nowhere, two storms merged over central California and the rain began. It did not just drizzle or sprinkle. No, it was a downpour. Although sunset was not for another four hours, the sky was dark. Soon lightning and thunder filled the sky. And the fairy tale wedding, the beautifully decorated tables, the white tulle and twinkle lights, were drenched.

Records from the National Oceanic and Atmospheric Administration (NOAA), which date back to the 1800's, state for June 6th:

1998: An evening storm drops 1.80 inch of rain in six hours on the Fresno- Yosemite International Airport, part of a total of 1.88 inch for the event. This set records in Fresno for the wettest calendar day in June, the wettest June overall and the wettest 6-and 24-hour periods in the month of June. Across Fresno and Tulare Counties over $27 million dollars in damage occurred to crops damaged by hail and trees downed by the wind. The Reedley area was especially hard hit with 414.8 million in damages. 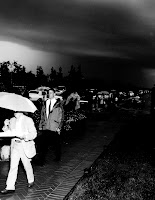 I remember the tears that rolled down my checks as I watched 400 guests wade down that long Jackson driveway under their umbrellas to join us for this blessed event. Amy had dreamed of an outdoor wedding. Hoping the rain would stop, we decided to have the reception first! All our wonderful friends helped set up the buffet lines under the carport. Guests walked on soggy towels to keep from slipping on the wet cement.

It did not stop raining that evening, but it did not keep us from having a wedding. We hastily set up the candelabras on the hearth, and guests found a way to see or hear from throughout the house; some were able to see and hear the ceremony. The music began, and Amy came down the winding staircase on Tony's arm. She was so beautiful, and what had been planned as a lovely outdoor wedding was transformed into an intimate setting around the hearth of this welcoming home.

I have favorite snapshots in my mind, moments I have tucked away of the day of my daughter's wedding. But there is one memory which truly symbolized for me the choice that was made that evening.

As we set things up for the ceremony to take place in the house, we made sure we dried everything off as we brought it inside. We lit all the candles in the candelabras to be sure they would light for the ceremony. But we forgot to dry and test light the Unity Candle.

When it came to that part of the ceremony, Amy and Jeff picked up their candles to join their individual flames together into a single flame. But the Unity Candle would not light. The wick was thoroughly soaked. After many tries, Amy removed the Unity Candle from its stand, blew her candle out, and set Jeff's candle in the place of the Unity Candle.

I remember all of us laughing with them at the situation. But as I look back on that moment; Amy's actions at that time speak volumes of how she and Jeff would approach their life together.

I know; fairy tale weddings are what most little girls dream of having someday. But too many fairy tale weddings end in broken promises, bitter custody disputes, or merely settle for relationships that have more to do with selfish desires than unconditional love.

What I saw that night, sitting on an ottoman in the Jackson's living room, witnessing my daughter and her husband make vows to one another before God and these witnesses was an act of commitment to take a higher path through life. The rain could have destroyed the wedding. It could have brought out the worst in these two young people. But they chose to find a path of transformation.

Married life is not always sunshine and blue sky. There will be storms and times when it seems the rain just will not go away. Some may make a choice to be destroyed by these times; others will be transformed in spite of them. I am so proud of the marriage that came from that rainy wedding night eleven years ago. I am grateful to watch Amy and Jeff love, honor and respect one another, in good times and bad, as they raise up another generation who are learning that when life sends a storm, you pull on your boots and pop up your umbrella, and find joy in the puddles! 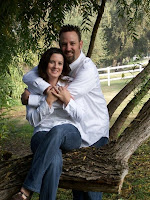