As I reflect on Scott's birthday (see previous post), I remember how I feel when people ask, “Wasn’t Scott’s birthday in November?” I often feel like responding with, "Yes, Scott’s birthday was, is and always will be November 23rd." Just because he died young, does not mean his birthday ceases to exist for those of us who remain.

Our day began early yesterday, as we sat bundled up in the chilly November fog to watch Kyle’s soccer team soundly win their final game of the Selma Turkey Shoot tournament. Kyle’s commentary on their win: “I really kept my head in the game!” Pretty impressive for a six year old! Kyle loves to play goalie, following in his Uncle Scott’s footsteps. 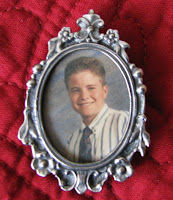 Then we all went out for a special birthday lunch. Jack noticed the pin I wear on my jacket this time of year. I wear it to keep Scott’s memory close to my heart. Jack’s four-year-old mind was busy as he fingered the pin and ran his hand repeatedly over the photo of Uncle Scott. Then Jack asked me, “Who is his wife?” I explained that Scott was not married because he died young. Jack asked, “How many was he?” I told him that Uncle Scott was only sixteen years old when he died. To which Jack replied, with a sweet tilt of his head and an expression that showed deep empathy, “Oh, that’s not much.”

No, that’s not much. But as one who has walked this road of grief for almost 13 years I have learned many things about experiencing peace with loss. Perhaps the most valuable aspect of my griefwork is that I have not let go of the relationship I have with Scott. I am Scott’s mom – I am, I was, and I always will be. Scott is my sixteen-year-old son. Although “that’s not much,” I have many memories.

The reality of Scott’s absence is heartbreaking at times. The solace I find is in the continued relationship I have with him. I know he is not here – I don’t “talk” to him or “see” him just around the corner. I have transformed our relationship from one of presence to one of memory. Scott is a part of me, and even though I must wait to physically hold him once again, I treasure the memories deep within that keep the relationship with my son precious and real.

May I encourage you - whatever your loss - as we enter the holiday season? Share stories and speak of memories as you gather together. Give those who grieve with you the joy of speaking the name once again, and allow those who have come after to know the loved one you so dearly miss, especially at these family times. I know the stories may bring tears to your eyes, but I firmly believe they will be a comfort to your soul.

Blessed are those who mourn, for they will be comforted. Matthew 5:4
Posted by Bonnie at 9:17 AM

I lost my Dad in November 2004. The very day he passed away (very suddenly) was the birth of our daughter to be - in China. It was unbeknownst to us at the time. In November, we celebrate our daughters birth along with the knowledge of another birthday for my Dad with his Lord and saviour.

Thank you for sharing your story. I'm typing through tears.